President Ibrahim Mohamed Solih has met with the members of the North Maalhosmadulu Madduvari Island Council and Women's Development Committee (WDC), calling on them to provide their full support and cooperation in conducting the government's development plans on the island.

Members of the Maduvvari Island Council relayed their residents' interests to the President, emphasising space scarcity and housing difficulties, as well as repairs to the island jetties and expanding the electricity network. They shared concerns regarding the ice plant on the island as well as healthcare upgrades, and discussed ownership of a closeby uninhabited island and the lack of an airport at the southern side of Raa Atoll. Members of the WDC also relayed concerns regarding the lack of office space to administer their duties and the need to establish a swimming track at the island.

President Solih shared the latest updates of ongoing and planned developmental projects at Maduvvari Island. He stated that he would speak with the proper government agencies to seek solutions for the problems and difficulties raised by the members of the island council and WDC. 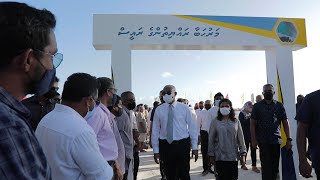 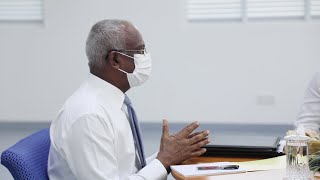