The Minister of National Planning, Housing and Infrastructure, Mohamed Aslam, announced on Wednesday that the process of issuing flats developed under the Hiya Social Housing Scheme to the respective recipients would commence on Thursday.

Speaking from the President's Office during a virtual press conference alongside Spokesperson Mabrook Azeez, Minister Aslam revealed that draws to determine the specific flats allocated to the respective recipients would commence tomorrow. Once the draws are complete, the Ministry would then proceed to draw up agreements with the respective owners and hand over the flats.

The Minister also went on to reveal the rent ceiling of the flats developed under the Hiya scheme — the highest monthly rent for each unit would be MVR 7,500, if the recipient chooses the option to not pay a down payment. He stated that the rent had been subsidised by the government, to ease the financial burden on lower-income families.

Speaking further, the Housing Minister gave details about the option for recipients in some categories of the scheme to opt for housing under more financially appropriate schemes carried out by the government. This option allows for more lower-income families with a greater need for low-cost housing to take up the units. The Minister went on to give details about the specific housing programmes planned and currently carried out by the government dedicated to the residents of Malé City. He revealed that applications under the programme would open in May.

The Spokesperson at the President’s Office, Mohamed Mabrook Azeez, shed light on the preparations and initiatives of the government and its agencies to address public concerns during the holy month of Ramadan. He went into detail about efforts by the government to ensure affordability and continued supply of staple food items and other essentials during the fasting month. The government is also implementing measures to ensure the uninterrupted provision of electricity across the country, especially as Ramadan this year coincides with the hottest months of the year, he said.

Minister Aslam and Spokesperson Mabrook also took questions from the media on a wide range of topics of public interest. 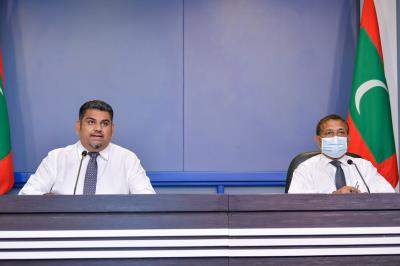